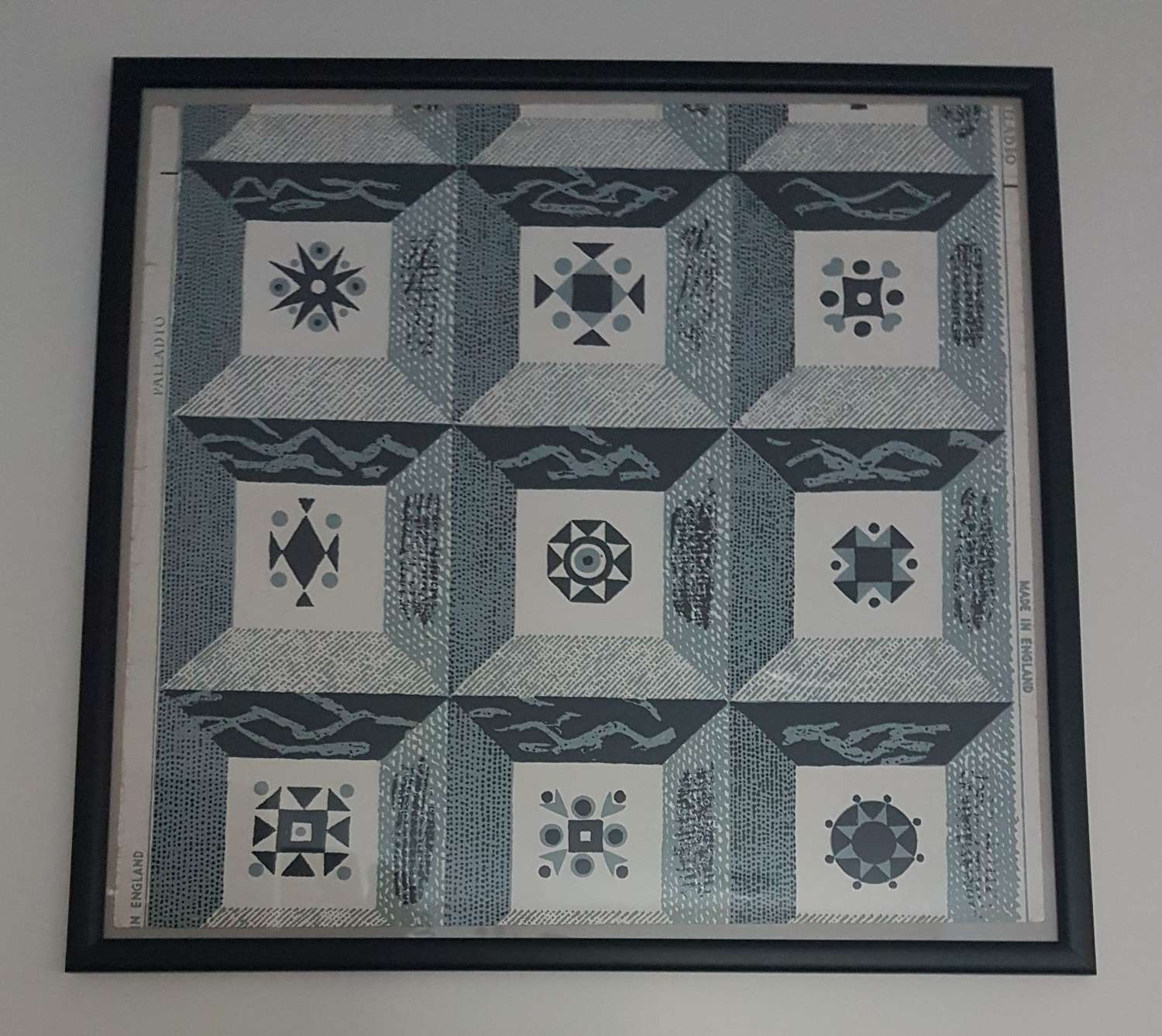 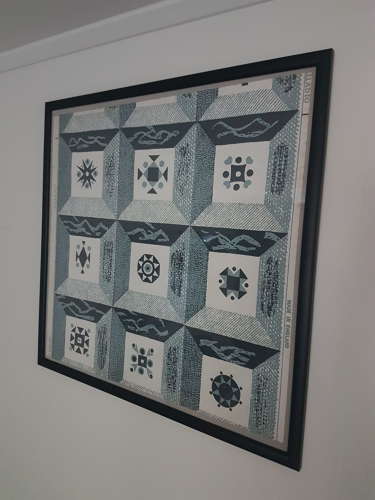 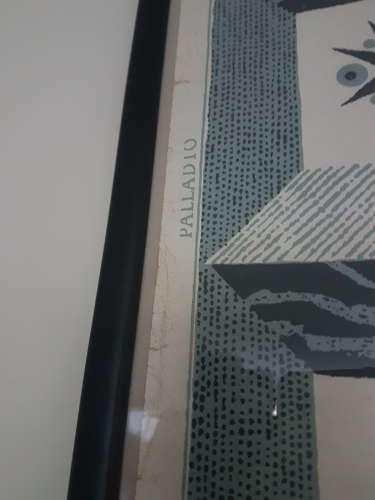 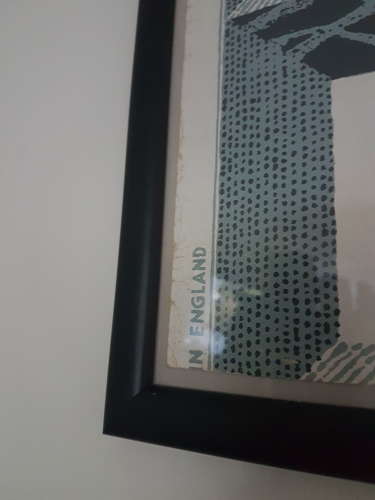 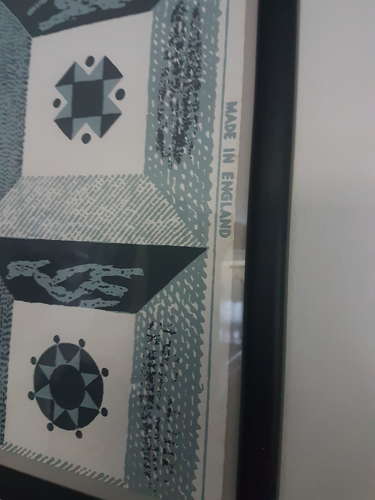 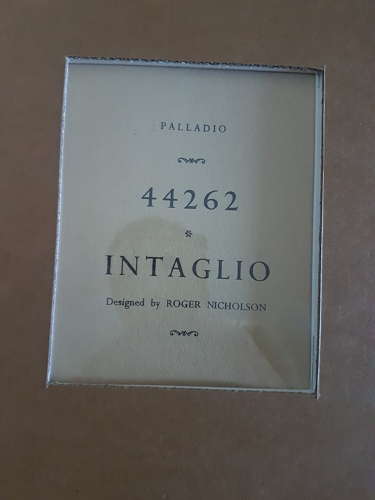 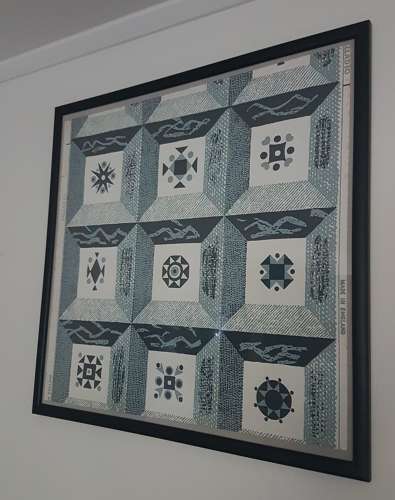 This is an original wallpaper sample from 1955 called Intaglio which was designed by Roger Nicholson for Palladio which later became Sanderson. We have had it freshly framed in an elegant rounded matt black frame with glass front and ivory white framing card, to the back we had a clear acetate window added so that the Designers name can be seen along with all the other information on it. This sample is from their first sample book in 1955 which was issued to architects. Wear consistent with age and use. Crease marks and foxing around the edges.

A sample of this is also held at the Victoria and Albert museum in the Prints and Drawings Study Room. It is also held in the Museum of Domestic Design and Architecture in London whose collection is designated as being of outstanding international value by The Arts Council in England. Roger Nicholson ARA (1922-1986) Roger Nicholson was born in 1922 in Wahroonga, New South Wales. He was the youngest of seven children and his parents had emigrated to Australia on a free passage before World War One. Life there was hard and Nicholson's father was eventually committed to an asylum. The family returned to England in 1930 without their father and moved to Rochester. Roger Nicholson's artistic talents were soon noticed and he was granted a scholarship to the Royal College of Art. He entered the painting school there in June 1940. Soon after, Nicholson was called up and stationed with the 51st Royal Tank regiment in North Africa. He continued to paint and examples of his work, now in the Imperial War Museum, London depict army life there. Indeed, after the war Nicholson was to comment that landscape painting had quite literally saved his life by endowing him with a gift of intense observation that often led him to place his tank on the safest ground. Following the war, he returned to the RCA to complete his studies under the benevolent eye of Gilbert Spencer and the Principal, Jowett, who believed him to be "an artist of distinction who should go far." In 1945 he went on to set up an industrial and graphic design partnership with his brother Robert, forming "Nicholson Brothers," one of the most promising firms in the country. Nicholson began teaching illustration and graphic art at St. Martin's from 1945 and he was brought back to the RCA by Robin Darwin as Professor of textile design in 1958. Aside from teaching he continued to produce commercial designs, such as the now famous 'Palladio' wallpaper design as well as fabric designs for the Cotton Board. Nicholson produced a varied body of work documenting all the phases of his life in portraits, landscapes and abstracts, all informed by his sureness of line and colour: "It was Roger Nicholson's gift and curse as an artist that he was incapable of making an ugly mark on a piece of paper." His brother Robert remembered his facility as an artist, recalling "the extraordinary rapidity and certainty of his hand, and there is the same facility, the same ease of execution in almost everything he painted. He could draw beautifully. He could draw like Edward Lear - but then he could paint too like Sutherland, Hockney, Nash and almost anyone else." Nicholson remained an intensely private man, disliking commercial galleries and reticent to exhibit. He died of cancer in 1985. Painting was always his life. He took great pleasure in observation and the joy of recording life around him. "Painting," he wrote, "the use of one's eyes and imagination, is the best use of life." Paintings by Roger Nicholson are held in a number of private collections. The Imperial War Museum, London holds several paintings by him in their collection. References: Gloucester Gallery. Roger Nicholson 1922-1986. 1995.